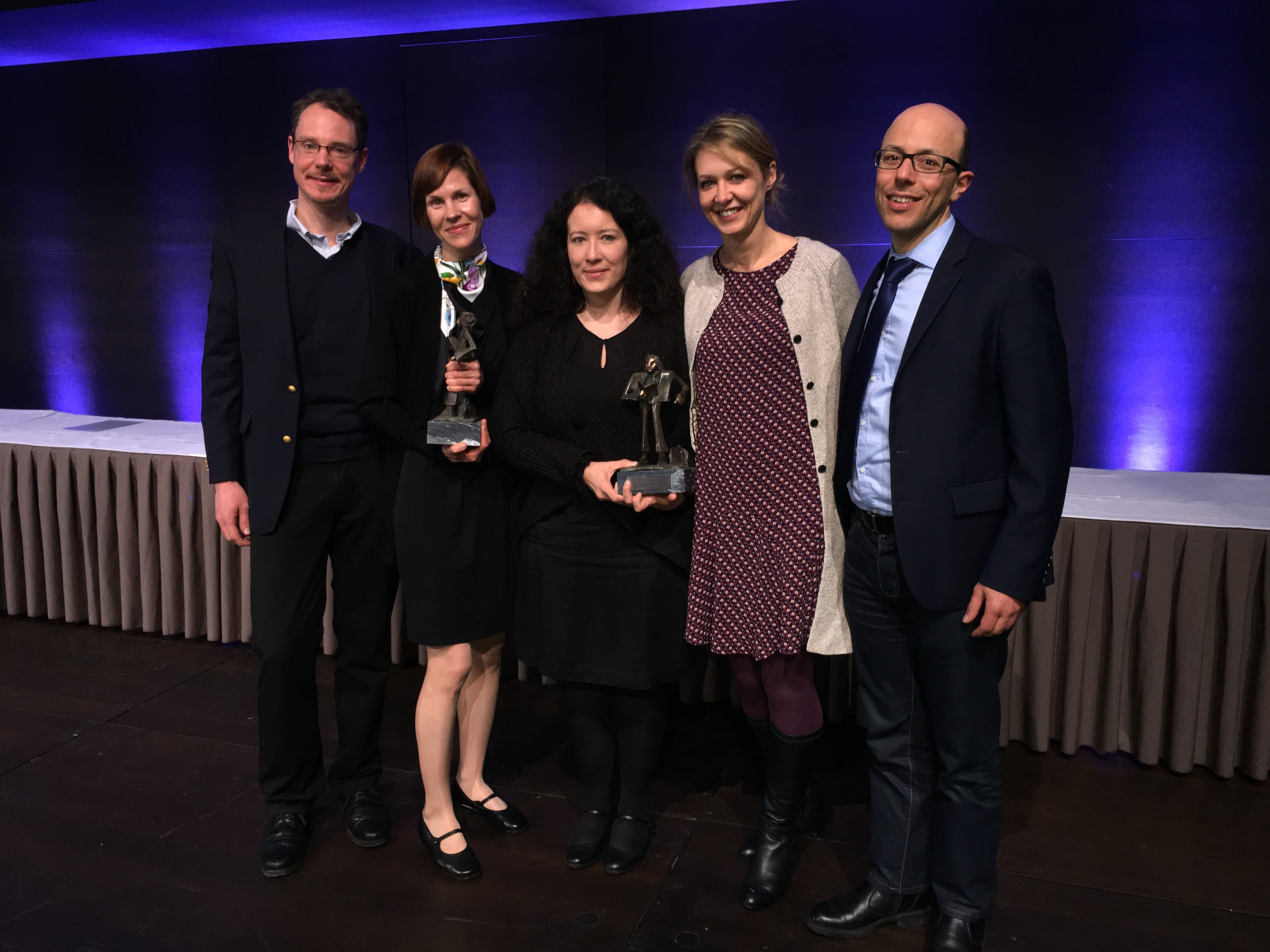 In January, Marie-May received the Pfizer Research AwardÂ with Kirsten Mertz for their work on CCL2, published in 2014,Â with Laura Bonapace, former post-doc in the lab. More details about this prize below.

Three FMI Postdocs, Marie-May Coissieux, Indranil Banerjee and Yasuyuki Miyake, have been awarded the Pfizer Research Prize 2016. Coissieux received the award with Kirsten Mertz (Kantonsspital Baselland) for their Nature paper on how stopping a breast cancer treatment actually aggravates the disease. Banerjee and Miyake described in a publication in Science how the influenca virus exploits a cellular process to crack open the viral capsid. The prize is one of the most prestigious prizes in Switzerland for a research paper.

Preventing therapy risks â€“ Oncology Award
Marie-May Coissieux works as a Postdoctoral fellow in the group of Mohamed Bentires-Alj. In the study, which Coissieux performed together with scientists from the FMI, the Novartis Institutes for BioMedical Research and the University Hospital Basel, the scientists showed that a promising therapeutic approach for metastatic breast cancer elicits deleterious effects after cessation of the treatment. Stopping CCL2 inhibition paradoxically increases metastasis formation and leads to premature death thus thwarting the initially beneficial effects of the treatment. This has implications for the design of therapies targeting these processes and indicates that therapeutic approaches to inactivate the chemokine CCL2 should be administered with extreme caution.
Â» More information about the Nature publication

Outwitting the influenza virus â€“ Infectiology, Rheumatology and Immunology Award
Indranil Banerjee and Yasuyuki Miyake were part of a research team of scientists from the ETH ZÃ¼rich, the FMI and the Biological Research Center in Szeged (Hungary). They discovered a key aspect of influenza infection: the capsid of the influenza A virus imitates a bundle of protein waste. Individual protein wastes are trafficked to a larger aggregate called an aggresome. A cytoplasmic enzyme called histone deacetylase 6 (HDAC6) and cytoskeletal motor proteins dynein and myosin II are central to aggresome formation and its subsequent disassembly. By containing unanchored ubiquitin chains, the influenza virus loosely mimics protein waste, and takes advantage of aggresome-processing machinery to crack open its capsid and to release its RNA genome for infection. The scientists are now looking for compounds that prevent HDAC6 from binding to free ubiquitin. Such a compound could be the basis for novel influenza therapies.

Yasuyuki Miyake worked in the group of Patrick Matthias, Indranil Banerjee is a Postdoctoral fellow in Botond Roskaâ€™s team.
Â» More information about the Science publication